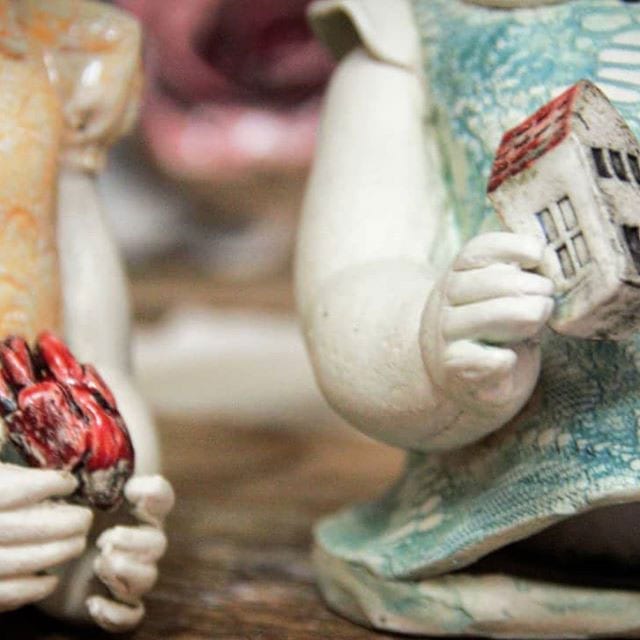 A page has been torn from a child’s storybook. The printed illustration shows a girl – Alice perhaps –
lying face down, head in hands. A transparent, realistic-looking heart, stencilled with an image of
the Madonna, has been stitched over the top of her with red thread. The aorta and pulmonary veins
are stuffed with dark velvet. The loose ends of thread have been left to straggle across the page:
heart-strings, waiting to be pulled. I am looking at one of Janelle’s earliest works, created when she
was a university student.
Everywhere I look in her studio, there are hearts. On a table reserved for work in progress stand two
porcelain sculptures of babies, clothes imprinted with lace and tulle. Their shut-eyed, red-lipped
faces are moulded from an old doll’s head – itself a treasured possession. In their hands are little
offerings: one child proffers a tiny house; the other delicately cradles in her fingers a human heart.
Behind them is the sculpture Janelle refers to as her “big lady”, her face cast from a hairdresser’s
dummy. Her forehead wears a diadem of skulls, her hair and shoulders festooned with roses. On
her left shoulder, where a bird might perch, is another, fist-sized heart. It is – literally – visceral, but
poignant, beautiful. It defies explanations, yet strikes an archetypal chord.
Janelle’s voice brings me out of my reverie. “I’ve got a little anatomical heart there that I use to get
the shape. A friend bought that for me – it has been so useful.” It stands mounted on her working
table. My eyes wander to another sculpture of a heart encrusted with barnacles. Janelle plans to
display it under a glass dome like a work of taxidermy. “I love the idea of a science specimen,” she
enthuses. “I did a ceramic one with screws and bolts – biomechanical – it looked really nice on a
stand.”
There are other recurring motifs: keyholes, and little stamp-sized houses. Janelle went through a
phase of transplanting houses onto moonscapes, but although the symbols recur, her art constantly
changes. “I’m still pretty obsessed with them,” she smiles, handing me a piece of hardboard covered
with more than a dozen little houses as though it were a box of chocolates. Each is hand-made,
windows and bricks carefully imprinted, bushes outside the doors painted with coloured glazes.
“Houses represent you as a person, the internal, what’s behind closed doors – it’s kind of a façade –
a very open symbol. Again there is an emphasis on texture and stamping, and using the simplest
tools – how little you need to start to tell a story.”
That is why Janelle’s work is striking such a chord: stories take us back to childhood. She has a large
bookcase, crammed with fairy-tale books – a whole shelf devoted to Little Golden Books. She opens
them like treasure-chests, revealing the illustrations. With palpable enthusiasm, she talks of
symbols, transformations, warnings, taboos. Once, she made some Red Shoes, imprinting fairy-tale
scenes onto the leather, symbols of the dangerous world of the fairy story: “Pitfalls, traps and poison
bait.” Janelle loves the children’s book formula of “the young person who has some skill and gets
trained up.” Harry Potter, Cinderella and the Ugly Duckling all have one thing in common. They are
about “children who feel they are worth more and are misunderstood.”
Her creative process is fertile ground for stories. “I love porcelain because it is just like fabric – it has
big particles. It dries quickly, but I can cut it with scissors and it holds an imprint beautifully – and it’s
not sticky, so it is like working with textile.” She recently received a huge collection of porcelain
moulds, all of them 1980s kitsch: “some of it is so lame, but you can change it.” There are busts of a
rabbit and a panther on her table, cast from these moulds, still unglazed. The panther was originally
intended to be four feet high and painted black, to stand beside a TV. Janelle has used its head,
hand-sculpting a crown for it: leaves, butterflies and a little skull. The rabbit now has roses on its

head, a songbird perching on the side of its face, and a little brick-coloured beetle stencilled on one
ear like a tattoo.
These stencils are a tale in themselves, connecting her current work with her university experiments
with “textiles, collage, assemblage, stencils, printmaking, linoprints, collagraphs”. Janelle admits
that she is sometimes like a “mad scientist”. She has discovered that if she feeds baking paper into
her laser-jet printer, the ink does not fix, and she can print out little insects and transfer them to her
sculptures. She has always been transforming found-objects by adding layer upon layer of her own
inspirations, just as fairy tales gather nuances as they are passed down the generations. Her
background as a print-maker accounts for the rich variety of textures in her ceramics. She imprints
wet ceramic with old lace doilies, using a rolling pin. She has hoarded boxes of plastic dinosaurs,
dolls and bird’s nests. She never knows when these might come in handy.
“Pottery is like a rabbit hole – there are so many layers, so many things you can do. Glazing is a
whole other discipline.” Her husband, Richard, has supported her, helping her to overcome her fear
of “big electrical things”, and encouraging her to buy a kiln. As a result, she has been able to
experiment with firing at different temperatures to achieve different colours in her glazes. She tells
me that it was Richard who cleaned up her studio when her enormous printing press “exploded”,
spattering oil over everything.
I have returned to stare at that little diadem of skulls: the reminder of mortality, the poisoned apple
of every fairy-tale. “I’m always exploring the same things – childhood, the self,” Janelle says. She
speaks of the strange beauty of jewel-encrusted catacomb skeletons. Our conversation wanders
onto those little hints of the uncanny that always peep from the corners of her work – dark things
amid the beauty which somehow speak the truth and help us to know ourselves. “Even my little
houses are not super cute – they have a little bit of an edge.” She and Richard also run a Jiu Jitsu
club. “All we do is look at people’s personalities, how they work and what’s affecting them
emotionally.” Like many empaths, Janelle “didn’t have the most nurturing childhood”, but her art,
like her other interests, is “about transforming, growing, warding yourself, and a rich internal life.
That’s what my work has always been about. You look at my art and find your own story.”

Enter your email address below to receive news about Janelle and her latest creations.

Hi there, just a quick note to let you know I will start listing my peter pan series of budgies this afternoon and they should

New budgies will be available thursday 9th of march at 10am on my website. regards janelle

I have had some work done on my website to include international orders. I apologise if you’ve trued to order in the past and had